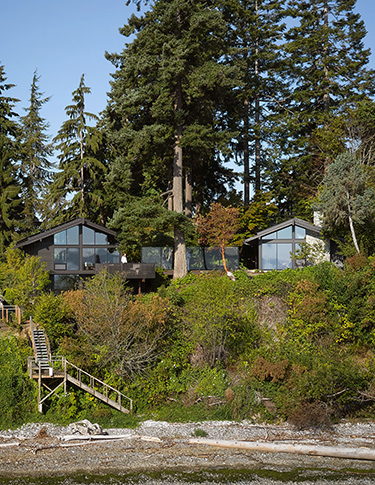 Photo by Kevin Scott [enlarge]
Loom House was designed by The Miller Hull Partnership. Work began on the reconstruction of this 1960s Moldstad home in 2018 and was completed in 2019. 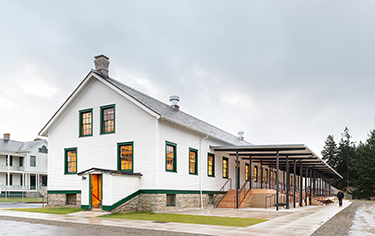 Loom House was profiled in the DJC in August. It is the first renovated home to become Living Building Challenge certified. This 3,200-square-foot home rests on .65-acre of landscaped bluff, nestled in a heavily forested area, overlooking Puget Sound and the Seattle skyline.

Fort Worden Building 305 is an adaptive reuse project designed and developed over seven years. Originally constructed as a turn-of-the-century military fort, Signal reshaped Fort Worden from a place for war into a space for creativity by revitalizing Makers Square, an 8-acre section of the fort facilitating gallery shows, studios and residency programs. In this first phase of the expansive project, Signal rehabilitated three buildings, creating new studio spaces and turning the fort’s first structure and original Quartermaster Storehouse into an art gallery.

This was also the sixth year of the Energy in Design Award given to commend projects that have made measurable significant strides in energy reduction while also maintaining the highest qualitative design caliber. This award was given to LMN Architects for the Mukilteo Multimodel Ferry Terminal.

In addition to the main juried awards, it was the fourth year of the Young Voices Selection (YVS), a program with the aim to engage and elevate the voices of young designers through direct participation and representation in AIA Seattle’s Honor Awards for Washington Architecture. The three YVS panelists — Kayla Ford, Assoc. AIA, of Integrus Architecture; Alex Ianchenko, Assoc. AIA, of The Miller Hull Partnership; and Ryan Nungester, Assoc. AIA, of Environmental Works — selected one Built project as the Young Voices Selection award winner: Fort Worden.

A recording of the event is at http://www.youtube.com/watch?v=6SXyfCMD5nE.